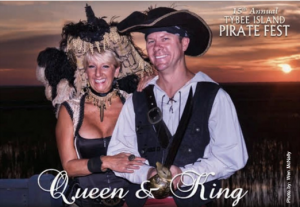 Yo- Ho-Ho! It’s that time of year again to hoist your anchors, ready yer sea legs and sail to Tybee’s 15th Annual Pirate Fest. So, splice the mainbrace and get ready to me
et our King and Queen of this year’s celebration.
Avast Matey’s, this year’s King is n
one other than Mayor Jason Buelterman. He’s been the Mayor of our fair isle for 14 years, ending his term in January 2020. Jason has smartly and instrumentally secured booty of plenty for Tybee’s beaches. He plans to venture off for higher grounds off the island o’Tybee and run for Chatham County Commis

sion Chair. Shiver me timbers! Did ye know that yar Buelterman was also a high school teacher at Johnson High? He has been known to be spotted off the ship on occasion, catching a wave, on what I can only assume is a pirate surfboard. Always a supporter and a sea rover at heart!

Batten down the hatches and prepare for the Queen, Kim Trammell. Kim was raised in Savannah and got her sea legs moving to the beach in the mid-1970s and has been a member of Tybee Arts Association since 2008 and for the past two years has been it’s president. She moonlights at the Tybee Post Theater as house manager and runs the TAA summer theatre camp for all the little lads and lasses. Arrrrgh, that a lot! Kim’s and her partner Renee have built and run the pirate encampment at the Tybee Island Pirate Fest for six years. Their pirate mentality, after sharing our island with thousands of visitors is to take it back by celebrating with other seafaring hearties in a romantic adventurous life of a pirate during the festival. Amongst all her other landlubber jobs, she is currently an administrative assistant at The Original Crab Shack, Blimey!  Kim and Renee share their crow’s nest with Kim’s sea cat Theadore. Don’t be a scallywag or a son of a biscuit eater and miss out on this year’s King and Queen Coronation at the Buccaneer Ball! 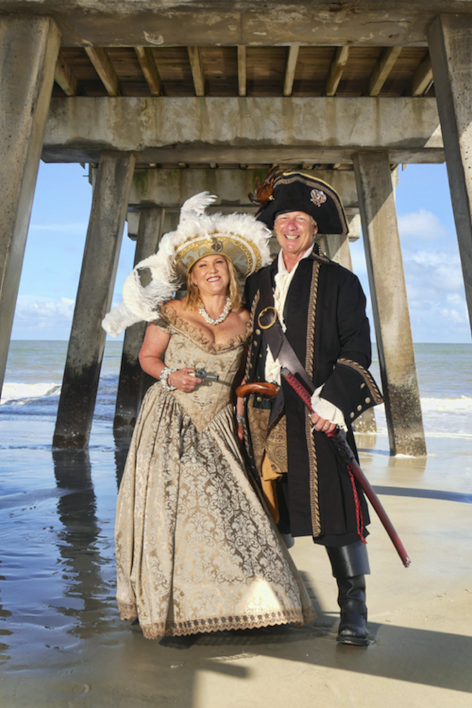 Weigh ye anchors and hoist the colors! Make way for the 14th Annual Tybee Pirate Festivals New King & Queen!
Every year, two individuals who embody the best qualities of our quirky little island are carefully selected to reign over The Tybee Pirate Fest to bring to the celebration all the enthusiasm and passion they offer the community. This year we couldn’t be luckier with Frank and Karen Kelly.
These two Pirates fell in love many moons ago, but life got in the way, and they both sailed on in different directions only to wash ashore many years later on Tybee Island to rekindle that love all over again. The Kelly’s made Tybee Island their permanent home in 2007, and four years later in 2011, they purchased the old Hunter House, restoring both its original name and historical charm. All the hard work paid off, and the Beachview Bed & Breakfast was named to the National Historic Registry the very next year.
Ever loving a good party, Karen started the Girls Night Inn fundraiser in 2012 bringing the community together with food & drink to raise funds for the Rysing Tyde food pantry. Over the past 5 years, Girl’s Night Inn has raised $45,000.
For the past 4 years, both the Kelly’s have volunteered before, during and after the Tybee Pirate Fest from helping on the Gate to taking care of the bands. This year along with Karens daughter Wendy Hicks, they have added a whole new crafts section to Little Mateys Cove.
So, batten down the hatches and raise the sails. Come one, come all, and join our Pirate King Frank & Pirate Queen Karen at the 14th Annual Tybee Island Pirate Fest. 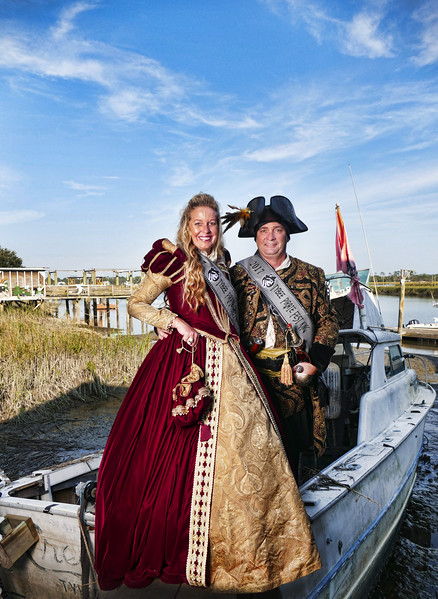 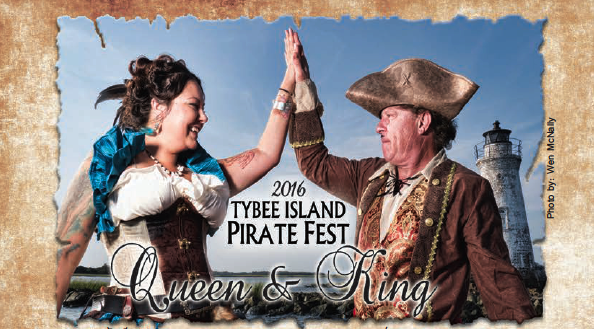 This year’s king and queen have been among us for many a year, often working behind the scenes and giving of their time, talents, and, frequently, even their own doubloons to help Tybee. Pour some grog and raise your glass to toast this year’s King Jodee Sadowsky and Queen Charissa Murray. A most fitting choice to lead all you wenches and swashbucklers in good-hearted pirate fun for 2016.

King Jodee has been the fearless leader of the World Breakfast Club for years and years. He felt the pull of the sand and the sea and found himself arriving on the shores of Tybee in 1983 where he and wife Cheryl would settle permanently and raise their own little pirates and build their successful business. An eggstraordinary adventure! Jodee’s involvement in what makes Tybee Tybee includes, among other things, being Big Kahuna of the wet and wild Beach Bum Parade back in 1999. The youngest Kahuna ever… and a Yankee to boot! Jodee and family are staunch Tybee supporters and go the extra mile, fathom, and knot to help any and all causes that benefit the island and its residents. If something needs doing or someone needs help, Jodee is the go-to guy. King Jodee comments that he really likes the fact that “this island can pull together to accomplish selfless acts of generosity of the first magnitude.” And in true swashbuckler fashion, Jodee can sail a boat, wield a knife, catch a fish, and then cook it for you.

Queen Charissa is of royal pirate blood and has been a part of Tybee’s ruling pirates since settling on the island at the young age of 12. Charissa’s mother, Paula, and her husband Paul were Tybee’s Pirate Queen and King in 2010. So, our little Pirate Princess now ascends the Pirate Queen’s throne. Charissa’s involvement with all things Tybee began when she first volunteered to help with the festival in 2006. She joined Tybee Fest, the festival’s creating group, as a full board member the next year and stayed on till its final year in 2011. Our Queen loves her pirates and her island and was the Chairman of Pirate Fest in 2010 and 2011. Charissa says she has worked every year of the festival in some manner or form even while nine months pregnant in 2014 with her second child. From decorations, vendors, and children’s activities to bars, she has done it all. Our queen is truly dedicated to bringing fun and festivities to benefit Tybee.

As with any well-run vessel, Tybee Island requires quite a large crew to keep r a float. That bein’ said, often one mate or another goes above & beyond to support their community. Every year, as the temperatures cool & fall approaches, Tybee recognizes two of these individuals by honoring them with the position of Tybee Pirate Fest King & Queen.

Both originally hail from different parts of Georgia, Lannie & Stacye both converged on our little island. Stacye arrived on the shores of Tybee for the first time as a young lass camping with her family. Seasons passed, and at the age of 21, she dropped her anchor & restored her first house. Lannie, growing up about 70 miles away, also traveled to Tybee throughout his early years. Being drawn to the sea, Lannie purchased a house, & chose to call Tybee his home. For many years, both lived upon our shores, often share many of the same shipmates, without ever meet’tn. In 1999, they crossed paths at Tybee’s oldest operating watering hole, Doc’s Bar. Wit’in the year, they became inseparable, & even went into business together. Oceanfront Cottage Rentals, named after the first property Stacye purchased in 1978, has grown to 105 beautiful properties located all over the Island. Years later, they embarked on an adventure & opened Tybee Island Wedding Chapel & Grand Ballroom, which has become a premier wedding venue in the state of Georgia. The Chapel has attracted visitors from all over the world and is also used for local fundraising events.

Lannie & Stacye have supported Tybee in so many ways it’s almost impossible to begin.   From housing fundraisers for Tybee Island Maritime Academy & The Tybee Post Theatre, to promoting Tybee Island any way they can, we are lucky to have them. So, batten down the hatches & raise the sails. Come one, come all, & come join our Pirate King Captain Black Bart Jarrell & Pirate Queen Anastasia of the Isle o’ Tybee at the 11th annual Tybee Pirate Fest. Weigh ye anchors and hoist the colors! Make way for The 10th Annual Tybee Pirate Festivals illustrious King and Queen, Dashing Gregorio Gustavo Desoto (Greg Stoeffler) and the Sauciest of Wenches Bella Bordeaux (Belinda Flanigan)! Last year these two friends were pillaging and plundering along the Ivory Coast (tis true and they have over 2,000 pictures to prove it) but now they are back in order to fill these exalted positions in true Tybee Island Style! Each year a pair outstandin’ Tybee citizens be selected to fulfill ’tis esteemed position ‘n we be pleased to announce that th’ honor has gone to Keith Gay ‘n Wanda Doyle! Both ‘o these Tybee residents spend so much ‘o their time ‘n energy makin’ ‘tis island a fantastic place to visit ‘n an amazin’ place to live. We thank our King ‘n Queen from th’ bottom ‘o our hearts ‘n gunna be raisin’ our grog at th’ Pirate Fest to salute them both! Our 2012 Pirate Fest King and Queen made their way to Tybee Island twenty years ago. From their cozy spot on Lazaretto Creek, the pair has helped the island grow into the destination it is today. This year, as the King and Queen of Pirate Fest, Captain Mike and Iris will enjoy the festivities from a completely new and pampered prospective. Please make sure to extend the royal greeting when you see them in the festival or down at the docks. In 2011, TybeeFest selected Joel Solomon and Susie Morris as the Pirate King and Queen. Joel Solomon is well-known on Tybee as the former owner of Café Loco (now Coco’s Sunset Grill) at Lazaretto Creek. This is where the Tybee Island Pirates first landed in 2005! Susie Morris and her husband Stuart Lyles are the proud owners of the Lighthouse Inn. In 2010, TybeeFest selected Paul and Paula DeVivo as the Pirate King and Queen. They are well-known on Tybee as the owners of DeVivo Marketing, which includes the website for Tybee – “TybeeIsland.com”, and the publications: “Where to Eat at the Beach” and “Tybee Homes”. They were also founding members of Tybeefest and instrumental in starting the Tybee Island Pirate Fest. Their latest venture is in Pirate Fashions – BuccaneersBooty.com, attire for the well-dressed pirate and wench. So, if it’s treasure you seek, these two probably know where to find it! In 2008, TybeeFest selected Jimmy Price and Natalie Gordon as the Pirate King and Queen. Jimmy Price is well known on Tybee as the recently retired Chief of Police. Natalie Gordon can do up your do at Salon Isobe and also serves on the board of the Tybee Island Tourism Council. In 2007, TybeeFest selected Bonnie Gaster and Jiggs Watson as their Pirate King and Queen. Bonnie is a well-known real estate broker on Tybee Island for Prudential SE Coastal Properties. Jiggs owns Tybee Island Insurance and is the organizer of the wet and wild Tybee Island Beach Bum Parade. If you haven’t heard of it The Beach Bum Parade is an island-wide water fight parade that is held each May. In 2006, TybeeFest chose Gene Kindrick and Debbie Brady Robinson as their Pirate King and Queen. Gene was the longtime commander of American Legion Post 154 on Tybee Island. Debbie is a well-known local artist and owner of the Atlantic Beacon Gallery and Hall of Frames. Debbie also serves on the board of the Tybee Island Tourism Council. For the 1st Annual, Pirate Fest event organizers reached out to Jack Flanigan to be their Pirate King and Jenny Orr for Queen. Jack owns The Crab Shack, which is an incredibly popular seafood restaurant on the island known as “Where the elite plunder in their bare feet”. And yes, that is a real parrot he is holding in the picture. Jenny is the owner of Fannie’s restaurant on Tybee’s south end which directly borders the festival grounds and has a great view of all the action.